Deictic shift may also be used to explain what is sometimes called 'futrue in the past' as in:

The essential point here is that it was said or believed in the past that John would be coming tomorrow. Although there is no actual verb of reporting, one can be 'understood', and the sentence is then exactly like:

John said/believed that he was coming tomorrow.
This is commonest with the progressive form. It is less easy to contextualize:
?(Yesterday) John came tomorrow.

However, this might be possible if thte original belief or statement was 'John comes tomorrow'. A more natural example of a simple past is:

At that time they didn't come till next week.

However, where there is no verb of reporting, it is not only past tense that may be used to indicate the temporal characteristic of the statement. This is clear from sentences such as those that relate to the proverbial boasting of the fishermen:

Other verbs that express time relations may be similarly used (will, be going to, used to):

Nor is this confined to verbs that indicate time. Verbs of process (9.2.5) may equally be invoked:

These are not all strictly examples of deictic shift. But they are all concerned with the status of the proposition expressed from the point of view of the speaker.

Rather different, perhaps, but still involving time/tense relations and the speaker is what may be called 'displaced' time marking as in (Lakoff 1970: 839):

The animal you saw was my dog.
The man you'll be talking to will be the Mayor.

The sentences are quite normal even if the animal still is my dog, or the man already is the Mayor. Here we have not only past tense, but also will for future time reference (7.2). Be going and used are not normally used in the same way, though they may be possible if the time is not already marked in a relative clause: 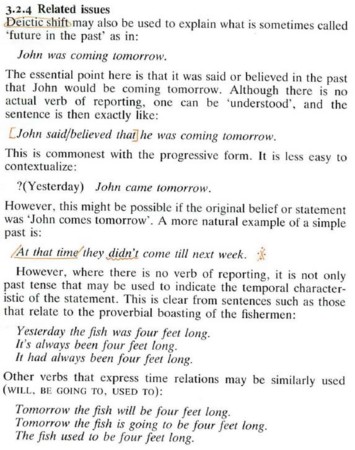 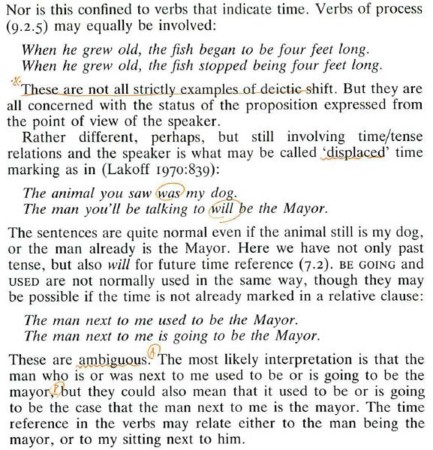